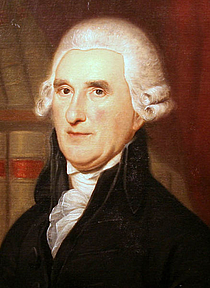 Born in New London, Chester County, PA, McKean was educated by Rev. Francis Allison at New London, and studied law in New Castle, DE under his cousin David Finney. He was admitted to the Delaware bar in 1755 and named deputy attorney general for Sussex County, serving 1756-1758. He studied law at the Middle Temple before returning to Delaware. From 1762-1775 he held a seat in the Delaware Assembly, serving as speaker in 1772.

While in the Assembly McKean also served as a judge on the Court of Common Pleas (from July 1765) and customs collector at New Castle (from 1771). In 1765 he was a delegate to the Stamp Act Congress, along with political ally Caesar Rodney; McKean was on the committee which drafted the Stamp Act Congress' memorial to Parliament, and nearly fought a duel with the body's president, Timothy Ruggles, after the latter refused to sign.

McKean was a delegate to the Continental Congress from 1774-1776 and 1778-1783, serving as president from July through November, 1781. In that capacity he voted for the Declaration of Independence (he and Caesar Rodney supported the motion for independence; their political opponent George Read opposed it). Soon after 4 July he left Congress to command the Fourth Battalion of Pennsylvania Associators, in defense of New York.

In August 1776 McKean drafted the Delaware constitution before taking a seat in the Delaware House of Representatives in 1776 and 1777, serving again as speaker from February through September, 1777. McKean sat as Delaware's president from 21 September through 20 October 1777, when George Read took up the president's duties.

McKean was also named chief justice of Pennsylvania on 28 July 1777, an office he held until 1799. He served as a member of the Pennsylvania convention which ratified the U.S. Constitution, and sat in the state constitutional convention of 1789-90.

McKean switched political parties around 1796 and became a Jeffersonian Republican; under the party's banner he was elected to three terms as Pennsylvania's governor, serving 1799-1808. He policies were bitterly opposed by William Duane in the Aurora newspaper, which led McKean to sue Duane for libel in 1805 (successfully in part). McKean was impeached in 1807 by his political opponents, but was never convicted and remained in office.

After leaving the governorship McKean retired from public life; he died in Philadelphia on 24 June 1817.

Acerca de mi bibliotecaMcKean's library is documented in the July 1817 inventory of his estate, filed in the Philadelphia, PA probate records. Entries here are listed as they are found in the inventory, along with their appraised value. McKean's library was valued at $91.02; his entire estate was appraised at $1,312.93.

McKean mentions several works in his will, dated 13 August 1814. He bequeaths to his son Joseph Borden McKean, “my family Bible with a cover thereon wrought by his mother, and my notes of cases in law, letters and manuscripts whatsoever” and to his son Thomas McKean, “my folio hotpress Bible.”

Tags have been added as appropriate.

Questions? Comments? Concerns? Do you know of additional books which should be included here? Please contact Libraries of Early America coordinator Jeremy Dibbell.