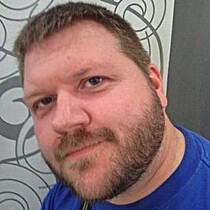 Books first, since this is a book site after all: I love scary stories and have a real soft spot for first time authors. I buy way too many books to reasonably read (especially since I consider myself a slow reader). I only read one book at a time. Otherwise I feel like I'm short-changing the author.

I like to carry my books with me everywhere I go (and I'm a cheap bastard), so I prefer good old mass market paperbacks. I will pick up trade paperbacks if that is all that is available, but avoid hardbacks.

I am perhaps a little too verbose in my reviews. I write like I talk. Can't help it.

In order to support my obscene book buying habit, I maintained a seasonal position at Barnes & Noble. I don't do it any longer. Took too much time. But I kinda miss it. Please put books away if you aren't going to buy them!

Other stuff: Born and raised in California, but cheap real estate brought me to the suburban hell that is The Woodlands, TX (a few miles outside of Houston).

I'm kind of a boring person and at times think I could be happy as a hermit. I'm a left-leaning atheist, which makes me a pariah whenever politics or religion come up in public here in Dubya's home state.

Like everybody else, I enjoy books, movies and music (books most of all). In all three I've noticed that I can enjoy Great Works and crap. But I always have some sort of justification for the crap I enjoy.

As for movies, I love horror movies (especially John Carpenter's stuff) and anything by Stanley Kubrick, Steven Spielberg or Sergio Leone. I'm also a big fan of Godzilla or any of the other Toho giant monster movies. For me it just doesn't get better than a man in a rubber suit knocking over buildings, unless it's two men in rubber suits fighting and knocking over buildings. Yeah, baby! That's the good stuff!

I won't bore you with my fav music. Acerca de mi bibliotecaA book with no rating means I haven't read it or it's been so long that I should re-read it. That's most of my books!

I try to feed my head with decent literature, but a quick scan of my library shows that really I'm a horror junky who loves a generous dose of hard sci-fi and some historical fiction on the side. My latest addiction is pulpy, schlocky westerns.

I really enjoy American lit from the first half of the twentieth century. Steinbeck is my very favorite author, but I also love Fitzgerald and Hemingway. I've tried some Faulkner and Sinclair Lewis and some others, but so far no one else has moved me the way those big three have.

I read a lot of fantasy as a kid, but I think I grew out of it once I discovered Arthur C. Clarke and hard sci-fi. I've tried picking up some fantasy since then, but it just doesn't have the magic it once did. (Except maybe for Michael Moorcock...) I do still like reading stuff from the pulp days. Fritz Leiber goes sadly unrecognized as a fantasy grand master. Love Robert E. Howard's stuff. He seems to be the antithesis of what fantasy is nowadays.

I love sci-fi in the 2001 mold. Near future stories set within the solar system about encounters with aliens or alien artifacts. Usually very technical descriptions of life in space with pretty flat characters. Steven Baxter is my favorite current writer. I also love Isaac Asimov and as mentioned Arthur C. Clarke.

Shogun introduced me to the wonder of historical fiction. I especially have a soft spot for ancient Greece and Rome. Some of my favorites are Steven Pressfield's Gates of Fire, Colleen McCullough's The Song of Troy and Steven Saylor's Roma Sub Rosa books.

I've only listed books here if I currently own them myself. (My better half has a slew of Dean Koontz books for instance, but I don't consider them 'mine' so they aren't listed.)

LibraryThing has moved to an all-private message system and removed the public wall on profile pages. All posts can be accessed in Messages.