Anyone else hate the *click on the cookbook* before getting to enter into the site? If the pictures were bigger and clearer, it wouldn't be a problem, but it took me 5 tries this time because I couldn't tell what the books were. Thanks for letting me vent. Goodreads is so much easier to get into.

Accept cookies from LibraryThing and don't log out. Then you will virtually never have to do the captcha.

I like the LT captcha much better than the Google alternative. I suppose on a mobile phone the pictures might be small. They aren't a problem on my iPad.

I enjoy the cookbook robot check, but if you find the pictures too small that's good feedback for the staff

Discussion of why we have it and your related choices https://www.librarything.com/topic/311248

Occasionally, but not often. (Sometimes I delete too many cookies).

>1 travelgal: I agree with >2 anglemark: I never log out. Have absolutely no idea what my password is. I think I have it written down somewhere...

My iPad knows mine for those times when my finger slips.

I log out occasionally. For me, LT's robot checker is fun, much easier than Google CAPTCHA, especially while on a phone.

Sometimes within the few seconds of clicking, I see covers that interest me enough that I look up the books as soon as my home page loads.

Is there still a CAPTCHA alternative for members struggling with the cookbook covers?

>10 aspirit: not sure. I logged out, and from https://www.librarything.com/enter/robotcheck I just find a link to the contact page.

>1 travelgal: Are you using the site on a normal desktop or laptop computer? Or a phone or a tablet?

I have problems with identifying the pictures on CAPTCHA.
I use an x5 magnifier page to see and still guess wrong. FYI, I use a laptop with a 14-inch monitor with the zoom set at 110-125.

>13 Bettesbooks: That's good info. I can look at making the images bigger for standard screensizes.

>2 anglemark: "Just stay logged in" is not a good answer for people who have difficulty accessing a site - it assumes you're accessing the site only from a small number of personal devices that you control, where it's both safe and possible to set a persistent cookie, and not everybody has that.

--from your local library worker who helps with the public computer banks.

LT's cookbook captcha is a lot better than some, but it doesn't always work great on small screens, it relies a lot on cultural context, and I'm actually noticing a shift in graphic design with newer books that make it harder to tell apart without being able to read the titles - both types of books are leaning hard toward minimalist graphic designs, fewer dragons and spaceships and pies and stir-fries to go by! Maybe it's time to shift genres?

How do I join the webinar taking place in the meeting room regarding using LibraryThing/TinyCat?

So, there may be a few potentially confusing covers. One of my current reads comes to mind: 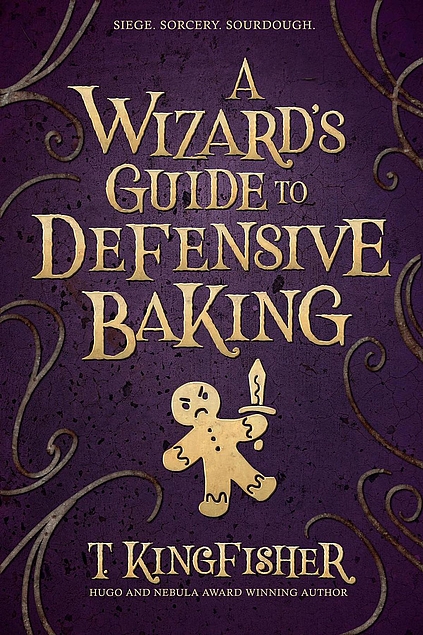 But I think the vast majority are still pretty distinguishable. And since (a) users don't have to get them all right to get in, and (b) frequently-missed covers are dropped from the selections, I think it's probably pretty minor.

>18 lorax: It's true! Like you said, the vast majority are fine, and it's great that you can get some wrong, and ones that are often wrong are dropped - I will often deliberately get one wrong, even if I know which it is, if it took a second glance to decide, just to weed it out. And I'm pretty good at it because I read a lot of both cookbooks and sf/fantasy.

But due to the current computer setup at work, I usually see it about twice a day these days, which is probably more than most people. I just reloaded for a total of four times/32 covers, and here are some of the books I got that took a second glance/a careful read of the English text:

None of those are super-obviously confusing, like the Ursula Vernon (although I did get that one once! And got it wrong on purpose, I think it's weeded out by now.) If I'd had to, I could have guessed right, and since I don't even have to guess right, it's not a terrible problem anyway.

But none of those are 'I can tell at first glance if this is a cookbook or an sf/fantasy novel'. And if I couldn't read the text, there would be several I had no idea, or I was guessing based mostly on aspect ratio and squinting very hard. I feel like, awhile back, I would have gotten maybe one or two like that in four tries, not eight? Maybe people who use it a lot have just gotten enough better at it that the marginal cases aren't being weeded out as thoroughly.

I mean, this is me complaining because the by-far-the-least-annoying captcha I use regularly isn't 100% perfect. :D But it ought to be fairly easy to swap out which categories it uses, on the tech end, and it might be fun anyway - I'm starting to get to the point where I recognize the same books coming up again and again.

I usually don't even see the cookbook captcha thing because I'm always logged in, but I just logged out to test how easy it was on my laptop (very clear images, easy to read titles). I did notice that the option for the 'traditional captcha' mentioned in the linked post (post 5) seems to be gone. It just says to contact LT for help.

Is there no longer any alternative to the cookbooks? That does seem less than ideal.

I got Whiskey and Water as my 'get it wrong on purpose' option today! Pretty obviously fantasy if you know the author or the screen is big enough to make out what's going on in the picture, but the title sure implies it's about food or drink.

>23 MrAndrew: I'm imagining a book with each page a different whisky:water ratio and with really great photographs.

Are you using a phone? The image is easily visible on my laptop screen. I'd imagine that "The images are too small to see" is not the kind of problem that would be solved by switching genres.

In general, the images are actually BIGGER on phone screens (but that depends on the size of your phone and the resolution). On phones there should be two images on each row, making the book cover, more or less, half the screen. I don't know if we can get a whole lot bigger without going to one cover wide and I don't want to do that for UX/behavioral reasons—I think it would present more troubles over the long run.

I might be able to get them a little bigger by reducing the spacing a little on phones.

Tablets are a different beast. If you think they are too small on tablets or a regular computer then we have some space to work with and possibly make them bigger.

>24 megbmore: i'm thinking whiskey by the pool, whiskey by a loch, whiskey by a river, etc. You don't want the water too close to the whiskey. The photographs would be exclusively of the amber fluid, of course.

>26 conceptDawg: Yeah, they're bigger on my phone screen too, that's not a problem for me!

For me it's mostly that there are certain covers where you have to be able to see very small details or read subtitles to be sure, and I'm not sure increasing the size will fix that at a reasonable level. There are some books where I have to squint to read the subtitles even at full-screen size. And there are some books where I see every detail and I'm still not sure which is which.

The original idea, I thought, was that cookbooks and SF/Fantasy books would, mostly, be obviously different enough on a broad design/style level that you wouldn't usually *need* to read subtitles or look at tiny details or be able to tell the difference between a small medallion of a medallion and a small medallion of a pizza, in order to know the difference. Otherwise you end up having to make a judgement call even if you can see the cover fine; do that food-related title and generic image, or food-related image and generic title, add up to a book about food or not?

And you can usually tell real quickly! At least 80-90% of the time it's super easy, which is enough for the allowed error to cover it anyway. But since I'm seeing it way more often than people are meant to, because I do a lot of LT on shared computers without persistent cookies/saved history, that 10-20% sticks in my memory.

>16 melannen: Yeah, the titles are usually too small for me to make out on my laptop, so I use the cover pictures as a guide and it does seem like they've been harder to tell apart lately.

It has made me a bit more nimble in accessing my Magnifier app.

>29 the_red_shoes: I keep a magnifier sheet close to my hand. These sheets come in various sizes.

For my laptop, I use a magnifier sheet that is the same height as my laptop screen, about 8" but is only half as wide, the same size as my 8" Kindle screen. You can raise or lower the sheet to get a different resolution level. The magnifier sheets are available on-line, in stationery stores, big box stores, etc. They come in various sizes, shapes, and magnifications. So not a one-size-fits-all.

As a tip for other seniors, I keep a 2x4 magnifier sheet in my purse so I can read labels in the store.

I got BURNING WATER as an option the other day. Took me a minute to decide if I should check that one or not. *haha*

I give at least 60% odds that The Southern Book Club's Guide To Slaying Vampires is *not* a cookbook! (I ticked it anyway.)

i thought that everything in the South is related to food. Are you sure that there are no recipies in there? Blood sausage, perhaps?

>34 MrAndrew: Since it's about slaying vampires: I would expect garlic dishes

Also, we allow a fudge-factor (pun intended) when picking, so you can guess incorrectly on one and it won't reject you.

>34 MrAndrew: Given my experience with books marketed to Southern women, I also give you 60% odds there's at least one recipe in there even if it's not a cookbook. :D

>36 conceptDawg: Yeah, that's why I tend to pick wrong on purpose on ones where I'm pretty sure but it still seems kind of ambiguous. It's set up to notice wrong answers and weed out problematic ones over time, iirc?

>37 melannen: You are correct. It does track wrong answers and weeds those items out of the pool of covers if people keep getting them wrong.

and of course, it's also placed melannen on a shared watch list as a possible robot. You may find other sites upping the captcha difficulty level, or requesting DNA samples.

I have to say as someone who is trying really hard to eat better. It can be a bit of torture looking at those great covers. #triggered *drool* *stomach grumble*