The majority of readers with an interest in Russian literature would rank 'Crime and Punishment' and 'The Brothers Karamazov' as Dostoevsky's finest novels. My question to the Russian lit aficionados on this board:

1. After these two novels, what do you consider Dostoevsky's finest novel and what translation would you recommend for it?

I rank the other three that I have read in the following order:

I read them in Constance Garnett translation, which I found fine.

Of the ones I've read, in order of best to worst:

1. Notes from Underground (Nabokov agrees, FWIW)
2. The Brothers Karamazov
3. Netochka Nezvanova
4. Crime and Punishment
NR. The Gambler (doesn't stand out in my mind, for whatever reason)

The novels by Dostoyevsky that I read, I read in Russian, so, unfortunately, I do not have an opinion about the best translations.
I would not say anything about what Dostoyevsky's finest novel is, as opinions might differ significantly on this, depending on tastes and other factors, such as when in our lives we read a particular work; however, my favorite works by Dostoyevsky, after the two novels that you mention, happen to be the same as in >2 BuzzBuzzard: , though The Idiot was probably my favorite novel by Dostoyevsky when I read it in my teens.

Definitely Notes From Underground and The Idiot , in that order, both in the Garnett translation used by the Limited Editions Club (The Idiot translation revised by Yarmolinsky--both seemed fine to me).

I read Notes From Underground, first part only, in an anthology of world literature, and found it astonishes modern. I read the complete version in the Heritage Press edition I got as a Heritage Club member and then just re-read it last year in the LEC version. Though brief, it is a masterpiece I would not rate inferior to C&P and Karamazov.

The Idiot remained unread for a few years after I got the Heritage edition, and was only prompted to finally read it after seeing Akira Kurosawa's film version.

Thank you for your response. These two books seem to be the consensus among the Dostoevsky cognescenti. Do you have a preference for the Heritage Press or the original LEC editions regarding these two works?

For The Idiot I prefer the LEC edition. The HP edition of Note/The Gambler is bound tête-bêche with a more modern binding design than the Limited Editions Club which has The Gambler followed by Notes in traditional orientation and with an allusive 19th century binding. You pays your money and you takes your choice, but for me the HP is the winner.

Sharing some pictures of my two copies of the Eichenberg illustrated Brothers Karamazov. One of them came with a booklet on Eichenberg published by the Yale University Library (i wonder whether this booklet was sold along with the book at the time of the original sale). 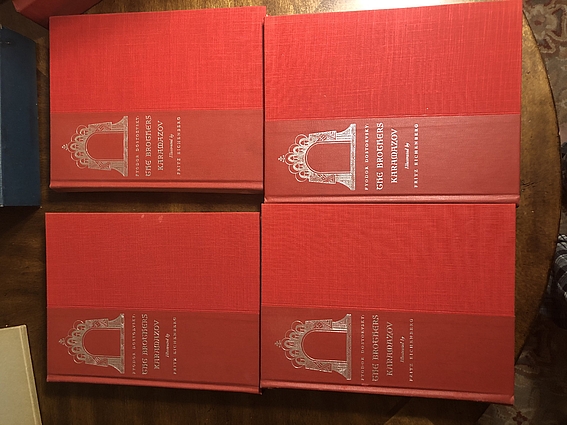 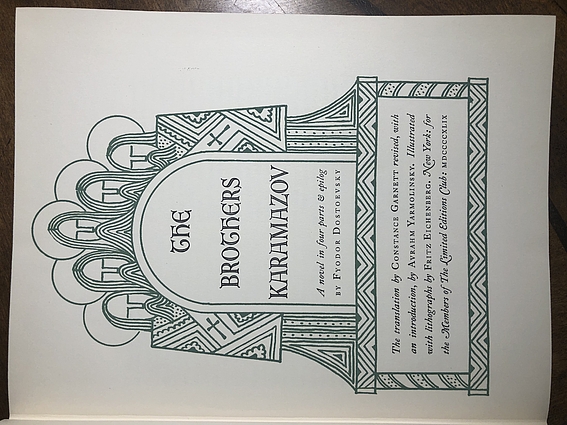 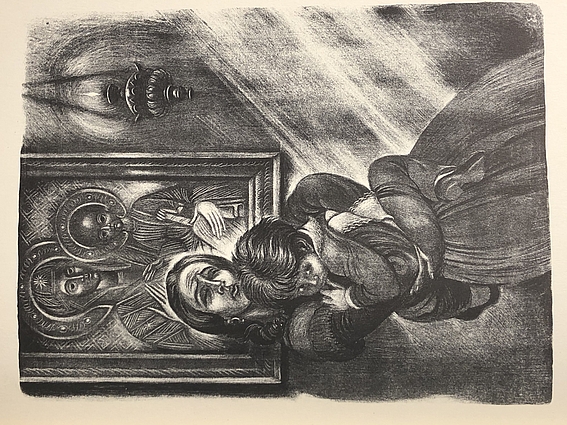 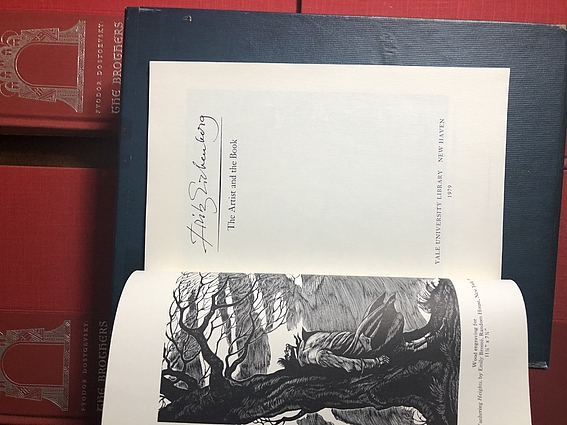 I am posting some pictures of a fine press Dostoevsky book I own below. The publishing house is Harrison of Paris and if anyone can share any further information about it, I'd appreciate it. 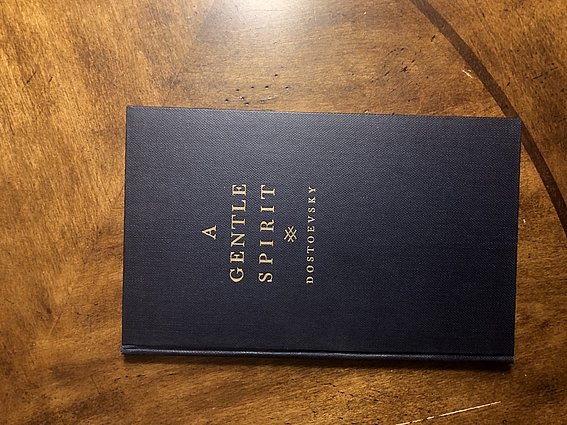 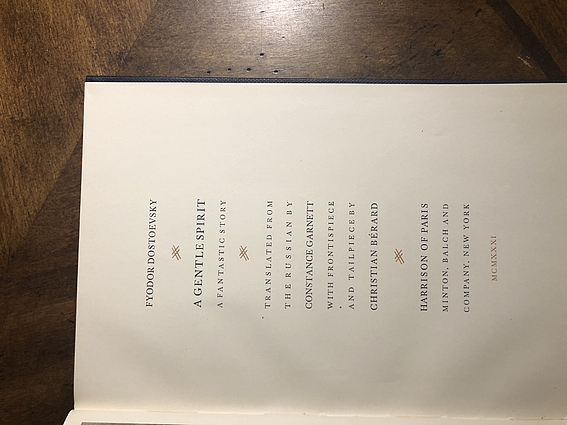 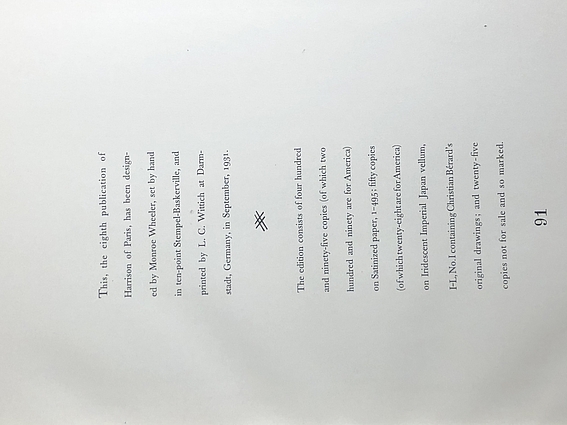 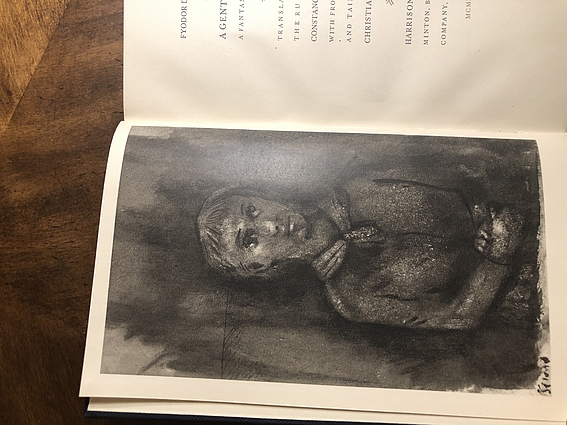 I know nothing about this press, though from the look of this book I need to see what else was published by them!

I do know something about Christian Bérard--one of the 20th century's greatest costume designers, his costumes and makeup for Jean Cocteau's Beauty and the Beast were so perfect I can't bear to watch any more than a few minutes of any other version of the tale because they all fall so short of Bérard's.

>9 blue.eyes: there’s a chapter about Harrison in Hugh Ford’s 1975 book* on English language publishers in Paris between the wars. The publisher was a partnership between Monroe Wheeler, an experienced typographer, and Barbara Harrison, who provided financial backing. Both contributed to selecting and editing the texts for the 13 books Harrison published, all during the early 1930s and all from Paris except the last.

If anyone has any more specific questions, let me know and I can check the chapter.

>12 abysswalker: Thanks for the reference to what seems to be an interesting book.

>12 abysswalker: Does the book say whether 'Fables of Aesop' and 'The Wild West' comprise the full version of these books or only abridged versions? Thanks.

>14 blue.eyes: ‘The Wild West’ is a collection of seven short stories. About half of what the LEC published. The book is nice but I would not overpay for it. It is the second Harrison of Paris publication illustrated by Pierre Falke.

>14 blue.eyes: regarding Aesop, I can't tell from the chapter description. I haven't seen the Aesop in person, but I will note that the 50 Calder drawings make it an expensive title now. As an aside, the paper sounds... intriguing:

Besides the type—12-point Old French Face—even the paper Wheeler selected for the Fables helped to convey the sense of antiquity. Named Auvergne, after that region of France, it was a hand-made pure-rag paper that Wheeler discovered was still being made, “just as in 1326, in the morning by farmers who worked in the fields all afternoon: the pulp beaten by water-driven hammers in stone vats, the great sheets, as soft as old handkerchiefs, dried in the open air.” Louis XIV had written his memoirs on Auvergne, and it had served for the first editions of Moliere. To the touch the paper felt coarse but its texture was uniform and smooth. The edges, slightly irregular and ragged, maintained a striking unevenness when piled one on the other in the bound volume, rather like a sheaf of bleached tobacco leaves. The covers, a soft, pale blue, possessed the same smooth-yet-coarse texture as the pages and had the appearance of old cloth worn into shape by long usage. Though the prospectus made no mention of it, the covers had been made from discarded blue aprons worn for years by the Auvergne schoolchildren, all no doubt admirers of Aesop’s wisdom and humor. It was a book in which the physical, the aesthetic, and the philosophic could hardly have been more felicitiously blended.

>16 abysswalker:
That description sounds very much like the Richard de Bas paper mill.

>17 kermaier: Apparently Richard de Bas paper mill is in the Auvergne region in France. Paper from the same region was used in the 1934 LEC School for Scandal and is very unusual.

>8 blue.eyes: My friend, congrats on the two copies of Karamazov! Lovely edition. The booklet appears to be from 1979 so it was not sold along with the book at the time of the original sale :)

>19 BuzzBuzzard: How foolish of me not to notice the date. Yes the Karamazov books are lovely and the reason I have two copies is because I was able to get the second copy for the irresistible price of $40.

This would be a place worth visiting:

I experienced this local warmth first-hand when I went to meet Sylvain Péraudeau at Moulin Richard de Bas, on the outskirts of Ambert. The mill dates from the 15th century when the Livradois-Forez was a thriving centre for paper-making due to the ample supply of water in the area that was used to power the mills.

It was between 1941 and 1942 that Sylvain’s grandfather purchased and restored the mill so it could start producing paper once again. During the 16th century there were over 300 water-powered mills in the area, but Moulin Richard de Bas is now the only surviving paper mill in Auvergne still in production, with 200 sheets of paper made per day. The quality of the paper is so high that the French constitution of the Fifth Republic was printed on it and artists Pablo Picasso and Salvador Dalí often used it for their paintings.

It’s fascinating to visit the mill and see how the paper is turned from raw materials into the finished product, still using the original techniques today to carry on a tradition that is such an important part of the heritage of the region.

Aside from paper, Ambert’s other famous export is its Appellation d’Origine Protégée cheese Fourme d’Ambert. The delicate blue cheese is reputed to be one of the oldest cheeses in France along with Roquefort and it appears on menus throughout the area.... With its abundance of lush countryside ideal for grazing cattle it’s no surprise that Auvergne is renowned for its cheese and the region alone accounts for over 25% of France’s AOP cheeses.

I have a copy of The Idiot for trade if anyone is interested. Comes in the original slipcase.