This document/agreement came to me folded and wrapped against a block of unmarked, yellow jade. The jade is very high quality, slightly smaller than a brick, but other wise unremarkable except that it was expertly cut at all but perfect right angles.

The document all but fell apart on opening so it was photographed in situ.I do not know much of Chinese characters ,but have been told that the writing is very old by those that do.The image was enhanced for color and contrast to make it more legible as it is faded.The medium was very thick like cardboard and may have actually been animal skin. A stamp was made on it that had left a faint impression in the form of a red circle with 3 small rounds within the circle.

From what I gathered it may have been an agreement/celebratory document marked by a token jade stone and the emblem (of a king?) and a northern (Korean?) king It is dated idiomatically 'in the year of the king and the waters' (?).

Can anyone give a more accurate translation? 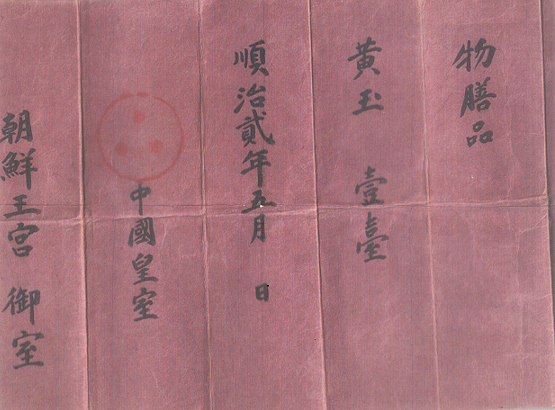 Yes, I posted it as a thumbnail labeled 'Old Cninese Document' as referencrd in this post title.

Best I can do for you in the five minutes or so I can spare:
You have a packing slip dated 1645, soon after the Manchus finished their conquest of the Ming dynasty and established the Qing dynasty. Emissaries announcing the founding of a new dynasty were sent to neighboring states, and, as was customary, they brought gifts. This one is identified by quality level, type of goods (block of yellow jade), date of gift, source (imperial house of China) and destination (ruling house at royal palace in Korea).