Every time I check up on this group. I think of my favorite character Menolly. Which cover version do you like of her? My favorite is the 1978 cover.

Not many people get on this group. It's kind of a sad fact that Anne McCaffrey is kind of outdated, but not to me. If this website was around late 70's early 80's this group may be a lot more popular. I looked up the first book Menolly starred in which was Dragonsong and found three different versions: 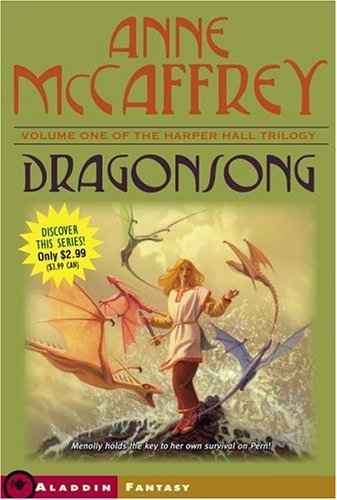 The first is the cover I have. I love old-fashioned covers, so this one is naturally my favorite. It shows all the fire lizards plus her playing music which is the essence of the whole story.

The second one I like the least. It just seems kind of blah. And in the third she looks kind of snobbish. Just because of her posture.

I have the first one, too. I like it because that intricate, swirling design makes me imagine Menolly playing an intricate tune on her pipes. And I must say I agree about that third cover. She doesn't look very nice, does she?

Yeah, the third one makes her kind of mean. Usually when somebody makes that face it's like, "I hate you" or like things. I mean, if I was surrounded by nine fire lizards (10 in The White Dragon for some reason), I would probably be more happy.

Thank you for posting the covers. It never occurred to me to do that.

No neither can I. plus the first one has more detail on the fire lizards than the others.

This is what we had for covers in France for that book.
I own the 2nd one but unfortunately don't have it handy for a better scan of the full-page art card that was usual in for some years that collection. I really like the first cover, as it appears to be most accurate in depicting the fire lizards (many show them as having hind feet only, with the front feet attached to the wings).

Here are some more covers I found:

This one is my favorite:

I used to have that particular edition, but alas, it is no longer in my collection...:mutter mutter:

Well if it's from your computer, it'll never work. You must find the picture from a website online, which would be great if you have Flickr. If you can find them, I'll try to help you more, because I would like to see them.

>9 Jarandel: Those are unique covers. That would be neat if I could read the language though.

DragonFreak, I found those online and saved them to my harddrive.

That may be faster. Post the URL's, and then I'll turn those into pictures. Or, you can Private Message me them.

Thanks, DragonFreak, here they are:

Sorry I didn't get this done sooner. I was out for longer than I expected.

Wow, I really love those covers!

That's okay, they were worth waiting for, hmm?

He does make some cool artwork. Hey, he made the art of the picture I choose from this group!

One of my most favorite works of art is from a Lord of the Rings calendar from the late 1970s, in which Michael Whelan painted the scene from the end of the triology, of Samwise and Frodo on Mount Doom.

I think he also did the covers for Tad Williams' Memory, Sorry and Thorn trilogy.

I found the picture I was talking about in (18), the Lord of the Rings painting done by Michael Whelan. You can see it here:

Is that the part when The Ring is destroyed and the Eagles come?

I hope we've not spoiled it for anyone... :x

Never thought of that. I'm pretty sure that 99.7% of all people who read Pern books read the LotR books, so no big deal.