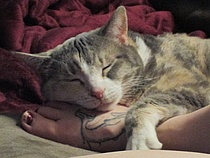 Acerca de míAfter ten years in academia, I left to pursue a career as a full-time writer and editor in 2014. Since then, I've become a full-time freelance editor, and I absolutely adore the work. My specialties are Suspense, Horror, Fantasy, and Science Fiction, but I also work in some subgenres of Romance, Mystery, Women's Fiction, Literary Fiction, and Nonfiction. My first chapbook of poetry, Oil Slick Dreams, was published by Finishing Line Press in 2016, and my poetry has been published in a pretty wide variety of journals at this point.

I've also completed a number of novels, and have recently signed with an agent. My first book is, as of this moment, being subbed to publishers.

I currently live in Cape Coral, Florida with my husband and our six rescues. We've got a neurotic coonhound (maybe purebred, maybe a mix--who knows?), a hyperactive puppy who we think is a german shepherd/black-mouthed cur mix, and four very spoiled cats.

Acerca de mi bibliotecaProbably about as random as you get. I read mostly contemporary work Lately, and my nonfiction tastes tend to run toward environmental or sociopolitical, though lately I've been reading about the grotesque and trauma, but that's about as much as you can pin me down...and I'm sure my library will find ways to contradict this description no matter what I write. Most of my books are entered here, I think, though there are still some boxes in storage at my family's house. In general, if it's been reviewed, I've read it, and if it hasn't, I haven't (or don't own it), though there are many anthologies which I've read various parts of and haven't reviewed. When it comes to what's here though, the obvious point of interest is simply that I'm addicted to books.

In my "To Read" collection, there are many many anthologies which I've read significant portions of, but they're listed in "To Read" until done. Also there are many many books which I have read, but so long ago that they need to be reread before I can think of reviewing them or remember more than that "I really liked that a long time ago..." (which is why I now review everything I read, to refresh my memory as much as for the system). This is the case with most of the Elfquest books, quite a few of the older suspense novels, and some of the classics as well.