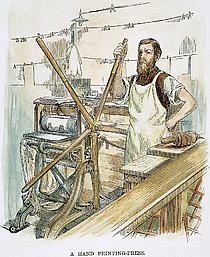 Acerca de mí"I have never regretted a book I've bought, only the books I didn't buy."

I collect books published by the George Macy companies, including the Heritage Press and, newly, the Limited Editions Club, thanks to the kind guidance of members on the Devotees forum. I am also a recent Library of America subscriber. One day I will make up my mind about joining the Folio Society and Easton Press as well. I'm fascinated by the whole concept of fine book clubs.

After dabbling in Heritage Press, Easton Press, and Folio Society titles, I decided, on a whim, to purchase Dostoevsky's The Gambler & Notes from the Underground, published for the members of the Limited Editions Club. When it arrived in the mail and I opened the package, I instantly knew that it was the most beautifully crafted book I had ever held. Since that day, I have been carefully selecting and acquiring LEC titles. My goal is to shoot for a collection of around 50 LECs, but this number might increase over time. The only problem that has resulted from my new hobby is that LEC books have spoiled me; current quality book publishers can't even come close to LEC standards. I know the LEC isn't exactly the Arion Press, but LEC publications appeal to me in a way that no other press or publisher has before, and I think this stands as a testament to the genius of George Macy and his successors. I enjoy collecting LECs from the Macy, post-Macy, and early Shiff eras. Each period produced unique and high-quality books (even during the Connecticut years).

Despite my focus on LEC and Heritage titles, books from other fine publishers, especially the Folio Society, still appeal greatly to me. If forced to shop outside of these publishers, I prefer hardbacks, and I always put dust jackets in Brodart archival coverings.

I love literature, the acts of reading and learning, self-education, and The Grateful Dead. I am currently an adjunct faculty member in the English department of a private university. I teach freshman writing composition and English literature and am pursuing a doctorate in literary studies. Teaching English, aside from good books, is my true passion in life.

Note: If you have LEC books you would like to sell, I am open to offers. Just private message me on this profile and we will discuss! Thanks.

Acerca de mi biblioteca"It can be good to start with a shipwreck. Your ideal authors ought to pull you from the foundering of your previous existence, not smilingly guide you into a friendly and peaceable harbor." - Christopher Hitchens

"As for being poisoned by a book, there is no such thing as that . . . The books that the world calls immoral are books that show the world its own shame." - Oscar Wilde as Lord Henry in The Picture of Dorian Gray

My taste in books has been described as eclectic, so perhaps my library reflects this. I am lacking in some genres (my current circumstances keep me focused mostly on scholarly pursuits), but I usually find myself enjoying "the classics," both canonical and modern, much more anyway. I love late-Victorian, Modern, and Postmodern literature. Basically anything heavy and serious. I am not a fan of genre fiction, YA, or "the good/bad book." I especially love literary fiction writers like Salman Rushdie, Martin Amis, and Ian McEwan, and journalists/polemicists like George Orwell, I.F. Stone, and Christopher Hitchens. Aside from those few aforementioned contemporary authors of fiction, I find myself drawn to the great books of the 20th century more than anything else. James Joyce is a special part of my life and my library as I do most of my scholarly writing on his short stories and have devoted a great deal of study to his works.

I joined LT to connect with other book collectors and like-minded individuals.

Dubliners by James Joyce
The Captive Mind by Czesław Miłosz
The Great Gatsby by F. Scott Fitzgerald
The Gambler & Notes from the Underground by Fyodor Dostoevsky
Crime & Punishment by Fyodor Dostoevsky
A Raw Youth by Fyodor Dostoevsky
The Possessed by Fyodor Dostoevsky
The House of the Dead by Fyodor Dostoevsky
The Torrents of Spring by Ivan Turgenev
The Short Stories of Anton Chekhov by Anton Chekhov
The Overcoat/The Government Inspector by Nikolai Gogol
A Lost Lady by Willa Cather
Sons and Lovers by D.H. Lawrence
The Magic Mountain by Thomas Mann
Death in Venice by Thomas Mann
Brave New World by Aldous Huxley
Resurrection by Leo Tolstoy
Childhood Boyhood Youth by Leo Tolstoy
An American Tragedy by Theodore Dreiser
Metamorphosis by Franz Kafka
The Trial by Franz Kafka
The House of Mirth by Edith Wharton
Selected Poems of Rainer Maria Rilke by Rainer Maria Rilke
The Stranger by Albert Camus
A Portrait of the Artist as a Young Man by James Joyce
The Short Stories of Oscar Wilde by Oscar Wilde
The Iceman Cometh by Eugene O'Neill
Three Tales of Gustav Flaubert by Gustav Flaubert
The Natural History of Selborne by Gilbert White
Tales of East and West by Rudyard Kipling
A Week on the Concord and Merrimack Rivers by Henry David Thoreau
The Picture of Dorian Gray by Oscar Wilde
American Notes: For General Circulation by Charles Dickens
Maggie: A Girl of the Streets by Stephen Crane
The Lyrical Poems of Francois Villon by Francois Villon
A Voyage to the South Seas by William Bligh
Simplicissimus by Johann von Grimmelshausen
The Life of Washington by Mason L. Weems
Pygmalian and Candida by George Bernard Shaw
Ah Wilderness! by Eugene O'Neill
Three Men in a Boat by Jerome K. Jerome
A Journey to the Center of the Earth by Jules Verne
Candide by Voltaire
The Age of Innocence by Edith Wharton
A Tale of the Sea by Joseph Conrad
The Poems of William Wordsworth by William Wordsworth
Jurgen: A Comedy of Justice by James Branch Cabell
Quarto-Millenary: 250 Publications of the Limited Editions Club
The Memoirs of Casanova by Casanova
The Battle of Waterloo by Leo Tolstoy
On Conciliation with the Colonies by Edmund Burke

The complete works of Charles Dickens, published by the Heritage Press (17 volumes).

First US edition of Finnegans Wake by James Joyce.

Ulysses by James Joyce, published by The Folio Society.

The Club Dumas by Arturo Pérez-Reverte - This is a personal pick. It's one of the most underrated books I can think of. I'm sure it will go on to be a classic. Roman Polanski had this title adapted into a screenplay and called it The Ninth Gate. Both the book and movie (staring Johnny Depp) are brilliant.