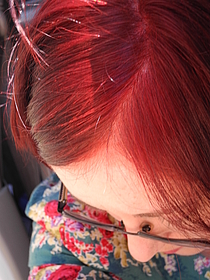 Acerca de míPlease don't be offended if I don't accept a friend request! I have a policy on social media of only befriending people who are my actual friends in "real life" or who have tastes exceptionally close to my own. In LT terms, that means I'm looking for people who have numerous books/authors in common with me (with similar ratings) and, preferably, who write regular reviews (I don't just want to know how you rate your books, I want to know why!) Anyway, sorry in advance for any requests I don't respond to. Likewise, I won't take offence if I send you a friend request and you don't respond.

So! I'm a bibliophile/bookworm, 'cellist, wildlife carer and French & art student from Perth, Western Australia who has migrated from the Amazonified Goodreads. I have fairly diverse reading tastes and try to draw my reading matter from authors of varied nationalities. Having reached a certain age (ok, recently turned 44), I have become horrified at the thought of how few of the wondrous books there are in the world I will be able to read in even a most optimistically estimated lifespan. This is complicated by the fact that I like to reread my favourites once I've forgotten the details (and, frighteningly, that doesn't take longer than a year or two.) I'm torn between wanting to read faster and preferring to luxuriate in really good books.

Acerca de mi bibliotecaHalf of my library is organised and half is in the raw, unedited shape in which it arrived from my Goodreads database, so a bit of a shambles. I am not adding all of the hundreds (thousands?) of books I possess, many of which are lurking in teetering piles because I do not possess enough bookcases (or rooms), preferring to add them only as I read or reread them. I'm endeavouring to write a review for every book I finish, even if due to circumstances it is only a sentence or two long. Sometimes they won't be very interesting, but I feel they will render my database more useful both for myself in future and for other LibraryThing members.

Another reason why I write lots of reviews is that the rating system is so subjective. For each book there will be varied and specific reasons why I've rated it the way I have and I want to be able to remember my motives in future.

In general terms, however, I use the rating system as follows:

4.5* Extremely good, not quite hitting the heights of 5* books. Still a firm favourite, to reread more than once.

4* Very good. Amongst favourites & I will want to reread.

3.5* Good, enjoyable but not a stand-out and I probably won't want to reread it but may keep it on my shelves just in case.

3* Average. I didn't actively like or dislike it & won't want to reread. All books receiving this rating or lower will be rehoused.

2.5* A largely negative response but the book has some positive features.

2* Overwhelmingly negative response but the book has a few positive features.

1.5* Actively disliked but with some sort of positive aspect.

1* Actively disliked, with no positive features.

.5* The most horrible nonsense I have ever had the misfortune to read (or start to read, as I wouldn't finish a book with this rating.) May it never cross my path again.

A supplementary note: Any books with a "finished" date prior to 28 July 2011 are guesses, some utterly wild.

(May 2014) I have recently decided to read books on the following basis: New book, reread mystery, new, reread non-mystery, new (possibly mystery), reread non-mystery, repeat ad infinitum interrupted once a month by whatever book club throws my way. This is, of course, of no interest whatsoever to the general public, however I post it here to serve as a reminder to my feeble, middle-aged brain.