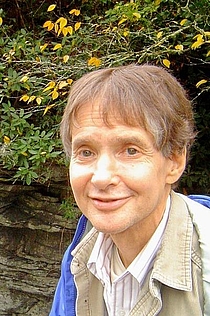 Acerca de míRobert Bowler is the Director of Halcyon Arts, an arts program presenting world music and spirituality in concerts, workshops and retreats..

Acerca de mi bibliotecaIn the fall 2005, a woman named Barbara Saucer who
lived in Weston, Vermont, learned that Robert Bowler (Beau) was teaching a course on the mystics of the west. She phoned the church and spoke with Beau saying she had a library of books, mostly on the western mystical tradition, collected from convents, monasteries and book stores by a wonderful, spiritual man, who traveled the world. "The library needs a good home. Would you be interested?" she asked.


​Beau agreed to provide a good home for the library. Borrowing a trailer and still needing two trips over to Weston, the books were moved to Immanuel Episcopal Church the following summer. They lived in the church library for many years.

Now at the Retreat House, the library can maintained and people can derive value from it as Robert wished. Now that Robert Schattner has passed on, it seems a fitting tribute that his library is now housed in what is also a consecrated chapel for a spiritual retreat center.