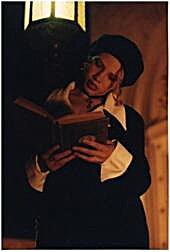 Acerca de mí"There are only three real sports: bull-fighting, car racing and mountain climbing. All the others are mere games."

"And he remembered thinking then that if she died, he was certain he wouldn't cry. For it would be the dying of an unknown, a street face, a newspaper image, and it was suddenly so very wrong that he had begun to cry, not at death but at the thought of not crying at death, a silly empty man near a silly empty woman.

How do you get so empty? he wondered. Who takes it out of you?"

"Behind me the beach was suddenly full of doorways, and I thought of ladies, tigers, shoes, ships, sealing wax and other lurkers on the threshold."

"I can believe things that are true and I can believe things that aren't true and I can believe things where nobody knows if they're true or not. I can believe in Santa Claus and the Easter Bunny and Marilyn Monroe and the Beatles and Elvis and Mister Ed. Listen - I believe that people are perfectible, that knowledge is infinite, that the world is run by secret banking cartels and is visited by aliens on a regular basis, nice ones that look like wrinkledy lemurs and bad ones who mutilate cattle and want our water and our women. I believe that the future sucks and I believe that the future rocks and I believe that one day White Buffalo Woman is going to come back and kick everyone's ass. I believe that all men are just overgrown boys with deep problems communicating and that the decline in good sex in America is coincident with the decline in drive-in movie theaters from state to state. I believe that all politicians are unprincipled crooks and I still believe that they are better thatn the alternative. I believe that California is going to sink into the sea when the big one comes, while Florida is going to dissolve into madness and alligators and toxic waste. I believe that antibacterial soap is destroying our resistance to dirt and disease so that one day we'll all be wiped out by the common cold like the Martians is War of the Worlds. I believe that the greatest poets of the last century were Edith Sitwell and Don Marquis, that jade is dried dragon sperm, and that thousands of years ago in a former life I was a one-armed Siberian shaman. I believe that mankind's destiny lies in the stars. I believe that candy really did taste better when I was a kid, that it's aerodynamically impossible for a bumblebee to fly, that light is a wave and a particle, that there's a cat in a box somewhere who's alive and dead at the same time (although if they don't ever open the box to feed it it'll eventually just be two different kinds of dead), and that there are stars in the universe billions of years older than the universe itself. I believe in a personal god who cares about me and worries and oversees everything I do. I believe in an impersonal god who set the universe in motion and went off to hang with her girlfriends and doesn't even know that I'm alive. I believe in an empty and godless universe of casual chaos, background noise, and sheer blind luck. I believe that anyone who says that sex is overrated just hasn't done it properly. I believe that anyone who claims to know what's going on will lie about the little things too. I believe in absolute honesty and sensible social lies. I believe in a woman's right to choose, a baby's right to live, that while all human life is sacred there's nothing wrong with the death penalty if you can trust the legal system implicitly, and that no one but a moron would ever trust the legal system. I believe that life is a game, that life is a cruel joke, and that life is what happens when you're alive and that you might as well lie back and enjoy it."

Acerca de mi bibliotecaI'm a big fan of fairy tales, and children's literature, fantasy, and old sci-fi. I also have some rather odd obsessions that feed into my reading material like glassblowing, virus and diseases, and carnivorous plants to name a few.

Favorite Books: The Abhorsen Trilogy, Doorways in the Sand, The Dragon Knight Series, The Enchanted Forest Chronicles, His Dark Materials, The Hot Zone, Kushiel's Legacy, The Last Vampire Chronicles, The Rainbow Goblins and The White Goblin, A Series of Unfortunate Events

What am I reading right now?
Sherlock Holmes by Sir Arthur Conan Doyle
and
The Call of Cthulhu and Other Weird Stories by H. P. Lovecraft

What am I reading next?
Bonk: The Curious Coupling of Science and Sex by Mary Roach
Brave New World by Aldous Huxley
Watchmen by Alan Moore
The Intention Experiment: Using Your Thoughts to Change Your Life and the World by Lynne McTaggart