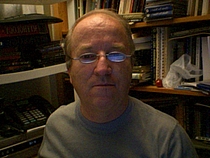 As a result of these questions I am interested in science in general and physics in particular in addition to mythology and the paranormal. I tend to be an eclectic questor, a paradigm buster. I follow what's mysterious.

Arthur C. Clarke's three laws hint at the nature of my views and interests:

Clarke's Second Law: "The only way of discovering the limits of the possible is to venture a little way past them into the impossible."

Or, as Isaac Asimov said "..in every century people have thought they understood the Universe at last, and in every century they were proved to be wrong. It follows that the one thing we can say about our modern 'knowledge' is that it is wrong."

The reason for the interest in the paranormal is that there always seems to be just enough evidence to keep me intrigued, but frustratingly, never enough to convince a skeptic. I feel that that such 'fringe' areas may be pointing to weaknesses in the current paradigms, where they fall apart and may be reconstructed with deeper understanding. If the paranormal is just delusion/confusion, we should at least get a better understanding of psychology.

I am interested in the nature of religion, not that I believe any of it, but that it shows up throughout our history seems to indicate there is something to it; whether its source is subjective or objective is yet to be determined. Remember Philip K. Dick's definition of reality "Reality is that which, when you stop believing in it, doesn't go away."

"A knowledge of the existence of something we cannot penetrate, of the manifestations of the profoundest reason and the most radiant beauty - it is this knowledge and this emotion that constitute the truly religious attitude; in this sense, and in this alone, I am a deeply religious man." (Albert Einstein)

"The religion of the future will be a cosmic religion. It should transcend personal God and avoid dogma and theology. Covering both the natural and the spiritual, it should be based on a religious sense arising from the experience of all things natural and spiritual as a meaningful unity. Buddhism answers this description. If there is any religion that could cope with modern scientific needs it would be Buddhism." (Albert Einstein)

I desire to gather as many explanations for events as possible and have an intuition that there may be great value hidden within things that society has thrown away. I search for understanding by looking for alternative interpretations of everything I think I know and find.

I tend to believe those who are seeking the truth but doubt those who find it.

I am still learning. It seems I am in a state of perpetual inquiry. I feel the journey is the reward. I am a possibilian.

Acerca de mi biblioteca"Each reader reads only what is already within himself. The book is only a sort of optical instrument which the writer offers to the reader to enable the latter to discover in himself what he would not have found but for the aid of the book."

--Marcel Proust, The Past Recaptured