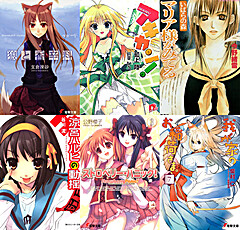 Light novels are a modern form of pop literature developed in Japan. They are often tie-ins or later adapted to manga, anime, and games, and usually feature manga-style illustrations. They are also much shorter then other novels, and are serialized by chapter in magazines before being printed in book collections.

Not many companies have printed light novels in English, but those such as Yen Press, Hachette, Seven Seas, and Del Rey have begun to translate and publish them.